Get Insider News and Analysis

We created the 1031 Insider newsletter for news just like this.
(100% free — Direct to your inbox)

Back in July, advisors for the presidential campaign of former Vice-President Joe Biden unveiled a new economic agenda.

This would normally be uneventful for us.

This is a bad idea that just won’t die.

Let’s break it down.

News came out of the third installment of the Biden camp’s economic platform. It was unveiled under the moniker “the Caring Economy”.

Here’s what we know about the former Vice-President’s “Caring Economy” agenda (as of July 28, 2020):

– elimination of IRC Section 1031 “like-kind” exchanges
– disallowing high-income taxpayers from offsetting real estate losses
– Like most hypothetical agendas, some is paid for through “future growth”

But the benefits go much further.

The entire real estate sector benefits from such exchanges, especially

Don’t just take our word for it.

After 93 pages of analysis, Ling and Petrova found:

In the longer run, rents would need to increase from eight to 13 percent to offset the effects of elimination.

That would shrink the supply of available rental space for businesses and individuals.

Price and rent effects would be more pronounced in high-tax states.

This study also dispelled the myth that 1031 exchanges are an end-around used by the rich to never pay taxes.

In contrast with the common view that replacement properties in an exchange are frequently disposed of in a subsequent exchange to potentially avoid capital gain and depreciation tax liability indefinitely, we find that in 88 percent of those cases in our dataset investors dispose of properties acquired in a 1031 exchange through a taxable sale.

And even more critically, the taxes paid are often higher than they otherwise would have been.

UPDATE: Ling and Petrova published a follow-up study in 2020. You can find it here. Below you can read the conclusion in their executive summary.

The authors sum it up best.

Overall, our analysis suggests that the cost of like-kind exchanges is likely largely overestimated, while their benefits are overlooked. The elimination of real estate exchanges will likely lead to a decrease in prices in the short-run, followed by an increase in rents in the longer run. These negative effects will be more pronounced in high tax states.

Elimination will also likely produce a decrease in real estate investment, increase in investment holding periods, and an increase in the use of leverage. 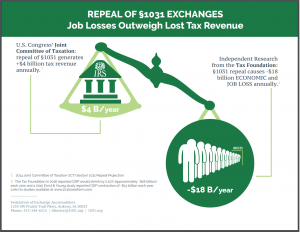 For example, a 2016 report by The Tax Foundation found that GDP would shrink by approximately $18 billion each year with repeal of IRC §1031.

We don’t want to oversimplify any issues here.

Economics is a complicated field. So is tax law.

Making good policy is difficult. It is likely a very good idea to consider all current tax breaks and expenditures when the national debt approaches $27 trillion.

…this is not a difficult call. Eliminating §1031 would be a net drag on the economy and very likely create a net loss to the U.S. Treasury.

The surest way to create economic growth is through capital investment. By “capital”, we mean the technical economic term that includes:

When capital investments improve, so too do production and labor processes. This allows goods and services to improve in quality and decrease in price.

This is the best method yet discovered to improve the average standard of living.

Small and mid-sized businesses rely on the temporary tax relief and flexibility provided by like-kind exchanges.

→ Your business needs to grow (or downsize) to accommodate a new spike (or decline) in demand
→ You go to sell your current business site, our of which you ran your business for 10 years
→ The new site of your business has better location, more space, and a more appealing aesthetic
→ You try to sell your property
→ Only to find out you owe an extra $1M in capital gains and depreciation recapture taxes

For most small- and mid-sized businesses, this kind of tax bill means they can’t switch to more efficient business operations.

The 2015 Ling and Petrova study highlights capital redeployment as one of the most underrated aspects of tax-deferred real estate exchanges.

Here’s a simple point, and we don’t want to overstate it.

But it’s always an important idea around election cycles.

There are lots of real estate jobs.

According to the Bureau of Labor Statistics, the real estate sector employed approximately 1.7 million Americans in 2019.

Many of these jobs rely heavily of 1031 exchanges for transaction volume and valuation.

We’ve shared this elsewhere, but the National Association of Realtors estimated that a huge chunk of transactions would disappear without §1031. 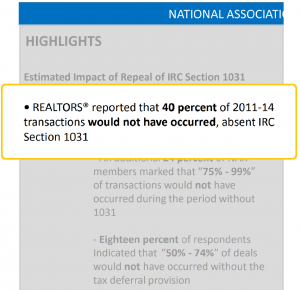 We could go on.

But to make a (very) long story (relatively) short,

• 1031 exchanges do not permanently rob the Treasury of needed income

• Huge sectors of the U.S. workforce rely on the business generated by 1031 exchanges

That said, it is easy to see the attraction to targeting “like-kind” exchanges.

– only going to offend a relatively small voter base
– get to call plays from the Robin Hood economics playbook
– real estate transactions generate large tax bills
– benefits to landlords and developers aren’t popular; programs for the young and elderly are.

It’s a long-standing trope to say that “1031 exchanges favor the rich” at the expense of the working and renting masses. 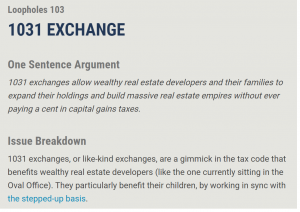 This is an understandable conclusion if you’ve never interacted with 1031 exchanges or the relevant data.

As we’ve already discussed, the vast majority of 1031 exchangers follow up their exchange with a taxable sale.

As we’ve seen that those sales bring in more tax revenue than otherwise would have generated.

We could go on.

Some of these are debatable. Others are completely wrong.

We like this analysis by Syndicated Equities Principal Tracy Treger – Why Repealing the Use of Like-Kind Exchanges is a Bad Idea.

This was published in 2019, but each argument is just as relevant today.

Response by the FEA

Almost immediately after news broke that the Biden camp wanted to sack Section 1031, the Federation of Exchange Accommodators spoke out. 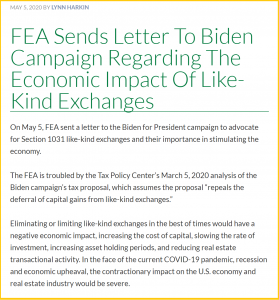 In the face of the current COVID-19 pandemic, recession and economic upheaval, the contractionary impact on the U.S. economy and real estate industry would be severe.

Also, the FEA points out that:

Here’s the letter in full:

1031x does not endorse political candidates.

The views expressed in this post reflect our current understanding of an issue where we happen to possess expertise and experience.

If President Trump’s campaign recommended the blanket elimination of Section 1031, we’d be happy to correct them too.

Sign up here to get a free 1031 Investor Guide

About the Author: Sean M. Ross

Sean is the current Director of 1031x. He also contributes to outside publications, including Intuit–Quickbooks®, InsideTheNation.com, and Investopedia. Previously, he worked as a financial advisor, consultant, ghostwriter, and finance journalist. Sean is the former editor-in-chief at Financial Poise™. He was a past contributor to Business.com and Axial Network. Sean's work has reached audiences in the United States, the U.K., Canada, and Australia.